From June 10,Shanghai AirportDue to major assetsReorganizationSuspension, The suspension time does not exceed 10 trading days.

As a former 100 billion white horse stock, under the dual pressure of the global epidemic and the unsustainable tax-free dividend, Shanghai Airport’s stock price has nearly halved in just a few months, and the market value has evaporated by more than 50 billion. This time, it injected Hongqiao Airport and other assets. Can it help Shanghai Airport return to its market value of 100 billion yuan?

The Shanghai Airport announcement shows that the counterparty of this transaction is a listed company holdingshareholderShanghai Machine Group.

The announcement stated that, given that all parties to the transaction have only reached preliminary intentions for this transaction, there is significant uncertainty in this matter. In order to ensure fair information disclosure, protect the interests of investors, and avoid abnormal stock price fluctuations, after applying to the Shanghai Stock Exchange, Trading of Shanghai Airport stocks will be suspended from June 10, 2021, and the suspension will not exceed 10 trading days.

It is reported that Shanghai Airport mainly operates and manages Pudong Airport, and its controlling shareholder Shanghai Aircraft Group operates and manages Hongqiao Airport. According to the “Shanghai Aviation Hub Strategic Plan”, the positioning of the two airports is to build a hub route network and flight wave based on Pudong Airport, and Hongqiao Airport will play a supporting role in the hub structure.

The asset restructuring has attracted much market attention because the problem of horizontal competition between the two major airports in Shanghai has existed for many years. Shanghai Airport mentioned in its 2020 annual report that the current horizontal competition that may exist is mainly reflected in the possible competition between the two parties for a certain route to take off and land at Hongqiao Airport or Pudong Airport.

With the announcement of this asset reorganization, the Shanghai Machine Group’s multi-year commitment may be fulfilled. Civil aviation expert Lin Zhijie said in an interview with the “International Finance News” that the transaction price has not yet been disclosed, so it is not easy to judge whether it is “expensive” or “purchased.” But regardless of price, this transaction fulfilled the requirements of state-owned enterprise reform. Hongqiao Airport entered a listed company, completed the mixed reform and listing, and Hongqiao and Pudong were integrated into the same listed entity, which can be said to be conducive to the expansion and strengthening of the main business. ; In addition, it can help solve the problem of horizontal competition that has plagued Shanghai Airport for a long time.

“Airport Mao” has a market value of less than 100 billion

As one of China’s three major gateway complex hubs and the largest hub airport in East China, Pudong Airport has consistently ranked among the top domestic airports in terms of passenger and cargo throughput. According to statistics from the Civil Aviation Administration of China, Pudong Airport ranked second among the airports in mainland China in terms of passenger throughput statistics in 2019, with 76.153 million passenger throughput, 3.6356 million tons of cargo and mail, and 511,846 flights per year. .

As a major international hub airport in China, Pudong Airport’s main business is mainly passenger transportation on international routes and related non-aeronautical businesses, of which non-aeronautical businesses include duty-free shops, tax retail stores, and catering. Thanks to the development of highly profitable tax-free business, Shanghai Airport’s tax-free rental income has grown rapidly. Its share price reached a historical high of 88.11 yuan in August 2019. Shanghai Airport was once known as the “airport mao”.

However, the global epidemic has brought an impact on Pudong Airport’s business, and in 2020, the number of takeoffs and landings on its international routes has dropped sharply.In 2020Civil Aviation AirportIn the throughput ranking, Pudong Airport fell from the second to the ninth place. The passenger throughput dropped by 60% year-on-year, and the number of takeoffs and landings dropped by 36.4% year-on-year. 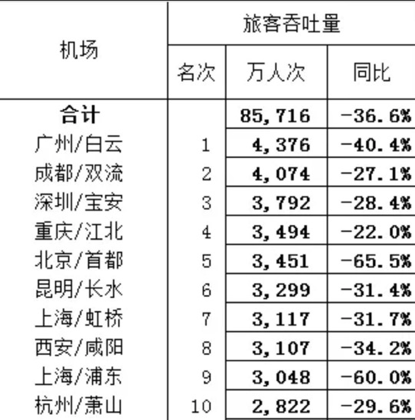 Another big shock comes from the modification of the tax exemption agreement.According to the agreement signed between Shanghai Airport and Rishang Duty Free Shop before the amendment, Pudong Airport obtains rental income in the form of actual sales commission and guaranteed rent. Rishang Shanghai paid 25.55 duty-free shop rents to Shanghai Airport from 2017 to 2019. Billion yuan, 3.681 billion yuan and 5.21 billion yuan, accounting for the company’s 2017-2019Operating incomeThe proportions were 23.3%, 39.53% and 47.6% respectively.

However, due to the impact of the epidemic, the tax-free business has been hit. According to the supplementary agreement in the Shanghai Airport announcement on January 30 this year, the method of obtaining rent has changed. When the actual international passenger flow of the month ≤ the actual monthly international passenger flow of 2019 × 80%, “Monthly actual fees” are charged according to the “monthly actual sales commission”; conversely, “monthly actual fees” are charged according to the “monthly guaranteed sales commission”. In other words, in the next five years, the revenue of its duty-free shop business will largely depend on the progress of the epidemic and the recovery of passenger flow between Pudong Airport’s international and Hong Kong, Macao and Taiwan routes, which is uncertain.

Civil aviation expert Qi Qi told the “International Finance News” reporter that acquisition is a requirement for the structure and business integration of the group and joint-stock company, and it is also an important measure for state-owned assets to optimize the governance structure and improve governance capabilities in recent years. However, the timing may be improper. As the stock price has not stopped falling and stabilized,Additional issuanceBuy inPerformanceUnclear assets are actually not wise. Reform rigidity and market flexibility need to be balanced, but it is still very helpful for listed companies to increase their mid- to long-term performance growth potential after the epidemic.

It is worth noting that although Hongqiao Airport’s tax-free business revenue accounts for a relatively low proportion, its passenger throughput before the epidemic was also lower than Pudong Airport, but thanks to the recovery of the domestic aviation market, Hongqiao Airport’s passenger throughput will be in China in 2020Civil Aviation AirportRanked seventh in China.

Lin Zhijie said that especially under the epidemic, there are almost no international routes and Pudong Airport’s tax-free income has fallen off a cliff. At this time, Hongqiao Airport is injected into the domestic market and the domestic market has recovered better, which will help stabilize the operating fluctuations of listed companies and improve the quality of listed assets.

Solemnly declare: The purpose of this information released by Oriental Fortune.com is to spread more information and has nothing to do with this stand.